Throughout the Riverway, you can find pieces of the original Miami and Erie Canal, and many places that celebrate its history.

THe M & E Canal was 274 miles long, connecting Cincinnati to Toledo - the Ohio River to Lake Erie. Construction began in 1825 at a cost of $8 million. In today's money? That's $177 million. At its peak, the canal had 103 locks and featured feeder canals, man-made reservoirs, and guard stations. Here are 11 places to see the canal's legacy.

This is a great place to start your canal adventure as it is one of the few remaining places you can ride on the canal in a canal boat. Board the General Harrison and your ride today will be a lot calmer, and less dangerous, than it would have been in the 1800s. Learn about the history of the canal itself and the people who worked it. Pick up some history tips like, "we now know that whiskey doesn't cure cholera." 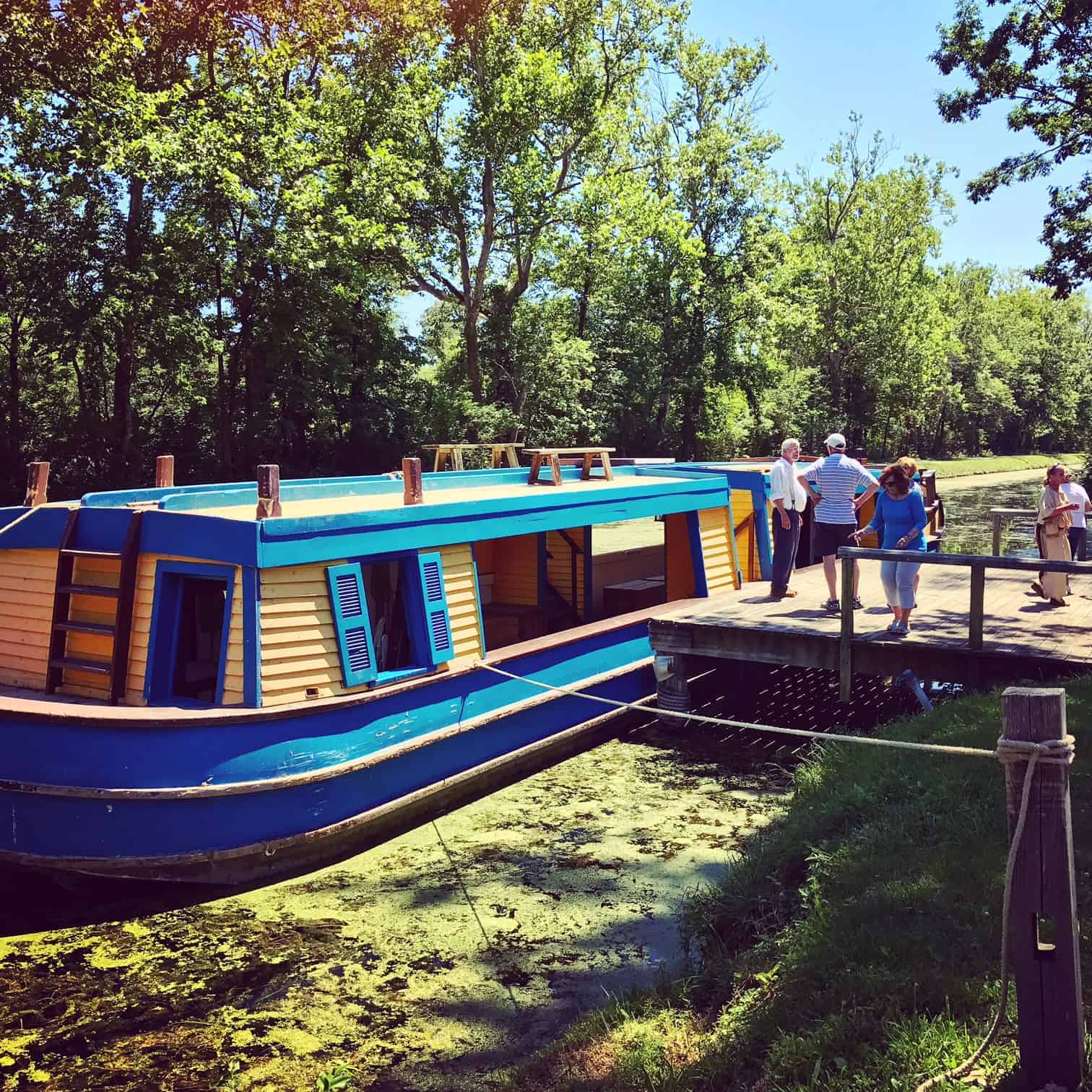 Locks have been used for centuries to aid boats in changing elevations. Gates would be opened and closed in sequence depending on whether you were gaining elevation or losing it. While Lock 9 itself is no longer in existence, there are still remnants of the old structure which are now part of the landscape for this park. Lock 9 Park holds a variety of concerts and events throughout the summer and offers access to the Great Miami River Recreational Trail. Public parking is nearby and it's the perfect place to have a picnic, enjoy the river, or jump on the trail.

You can still see the twin arches of the old culvert at Twin Arch Reserve. While culverts were very expensive to install at the time, they more than made up for their expense in long term maintenance savings. Culverts were used to cross a stream and today you can still see that evidence. Twin Arch Reserve has 35 acres and .7 miles of trails along the Great Miami River. It is a great place for hiking, biking, fishing, kayaking, canoeing, and viewing wildlife.

In 1909, the last paying canal boat traveled through the city of Troy. Canal use declined after the railroads came and the Flood of 1913 secured the canal's fate. In 1925, the Hobart Brothers built over the old lock and for centuries it was forgotten. In 2015, the old canal blocks were removed from the site after the Hobart Building was torn down and in 2016 they were placed at Treasure Island. While you're checking out the stones, why not paddle down the Great Miami River? Treasure Island offers rentals, a restaurant overlooking the water, and is located on the Great Miami River Recreational Trail.

According to the brewery, Lock 27 was also called the Sunfish Lock. Located a few miles south of Miamisburg, it was originally completed in 1829. The Lock was rebuilt in 1907, and then disappeared with the demise of the canal. What stands there today is a re-creation built in 1990. While not the original stone lock, the re-creation provides a great sense of scale and dimension of the original lock. If you've already seen your fair share of stone walls, however, we recommend trying the brewery itself. Located at the Dayton Dragons stadium, catch a game, grab a beer, and enjoy the view. 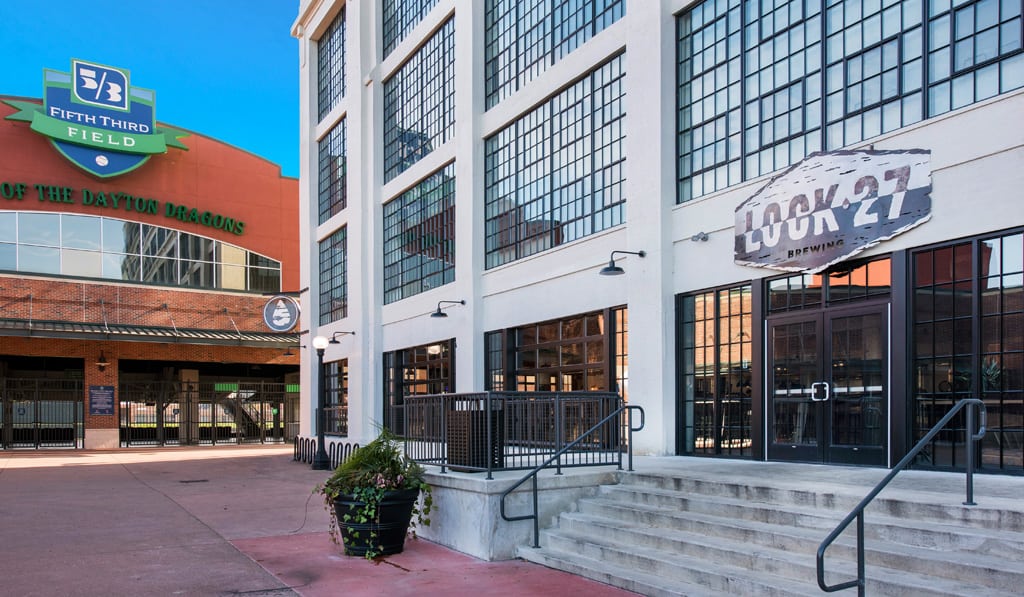 In one of the more subtle references to the canal, the roof line of the main library is set at a 12 degree angle. Why? That angle mimics the 12 degree angle of the old canal that is now Patterson Boulevard, where the library now sits. In fact, the whole inspiration for the library is water. Six pieces were commissioned in total and each are worth a visit.

Canal Street Arcade and Deli is located on the old canal in downtown Dayton. Take a walk up and down the street for kiosks highlighting the history of the region and make sure to stop in for lunch (family friendly) or dinner (over 21). Their deli sandwiches are top notch and their free-play arcade games are an added bonus.

Rivertown Chili and Watermark Restaurant are side by side on the old Miami Erie Canal. Try a bowl of Texas Red, or enjoy a wrap outside on the patio. You won't go away hungry.

A drive along the river in Franklin will showcase one historic mansion after another. Franklin was built on the paper mill industry, using the canal for transportation. When the canal fell out of favor, a variety of other transportation was there to pick up where it left off. Check out the work of muralist, Eric Henn, to see snippets of Franklin's transporation past. 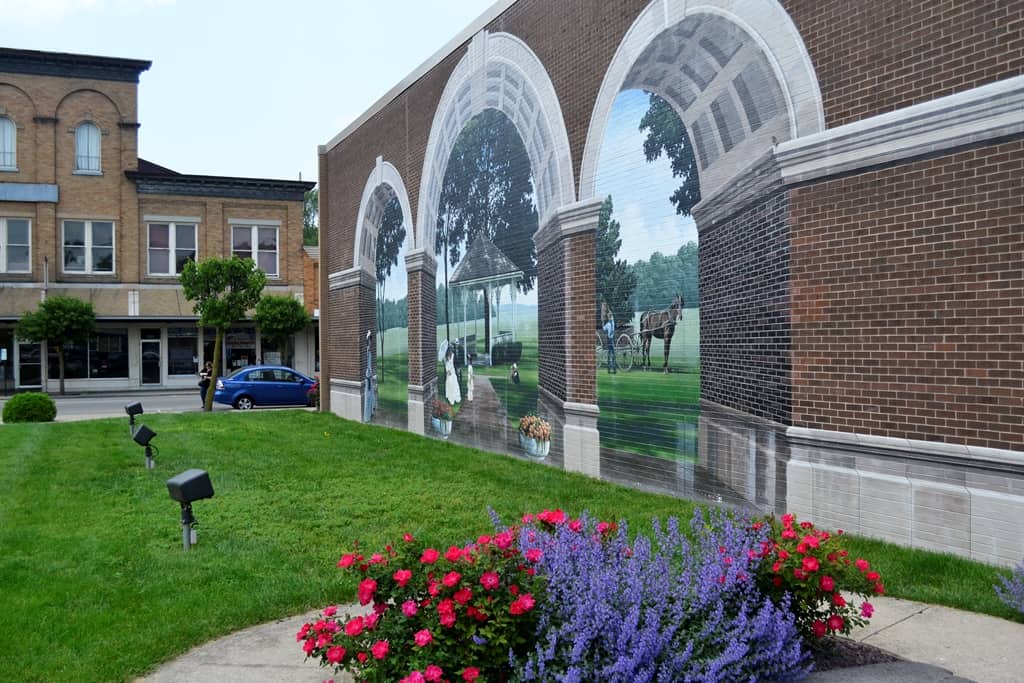 Middletown was the groundbreaking of the Miami Erie Canal on July 21, 1825. According to the Ohio History Connection, “on July 4, 1825, at Licking Summit just south of Newark, Ohio Governor Jeremiah Morrow and New York Governor De Witt Clinton, the man most responsible for New York's Erie Canal, turned over the first shovels of dirt of what would become the Ohio and Erie Canal. On July 21, work began at Middletown on the western canal route. This canal became known as the Miami and Erie Canal.” The Canal Museum was erected in 1982 as a replica of a lock tender's house. It is located on the former site of the Miami-Erie canal and the Hydraulic Canal on the outskirts of current Smith Park.

This is the only site on our list that isn't the Miami Erie Canal, but is canal history nonetheless. The Hamilton Hydraulic supplied water power to shops and mills, spurring on one of Hamilton's greatest periods of growth. The Hydraulic sat on a canal that started 4 miles north of the city and saw its first operation in January 1845. As water flowed through the canal, it turned millstones in the Hydraulic that would then provide power. When the stationary steam engine became affordable, the canal was filled but the Hydraulic remained. After World War I, it attracted Henry Ford to build a plant which produced auto parts. You can see the Hydraulic today as you ride on the Great Miami River Recreational Trail in Hamilton. 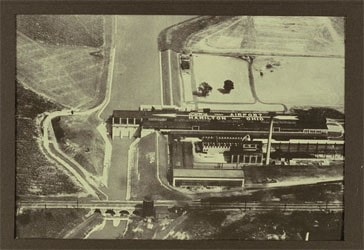